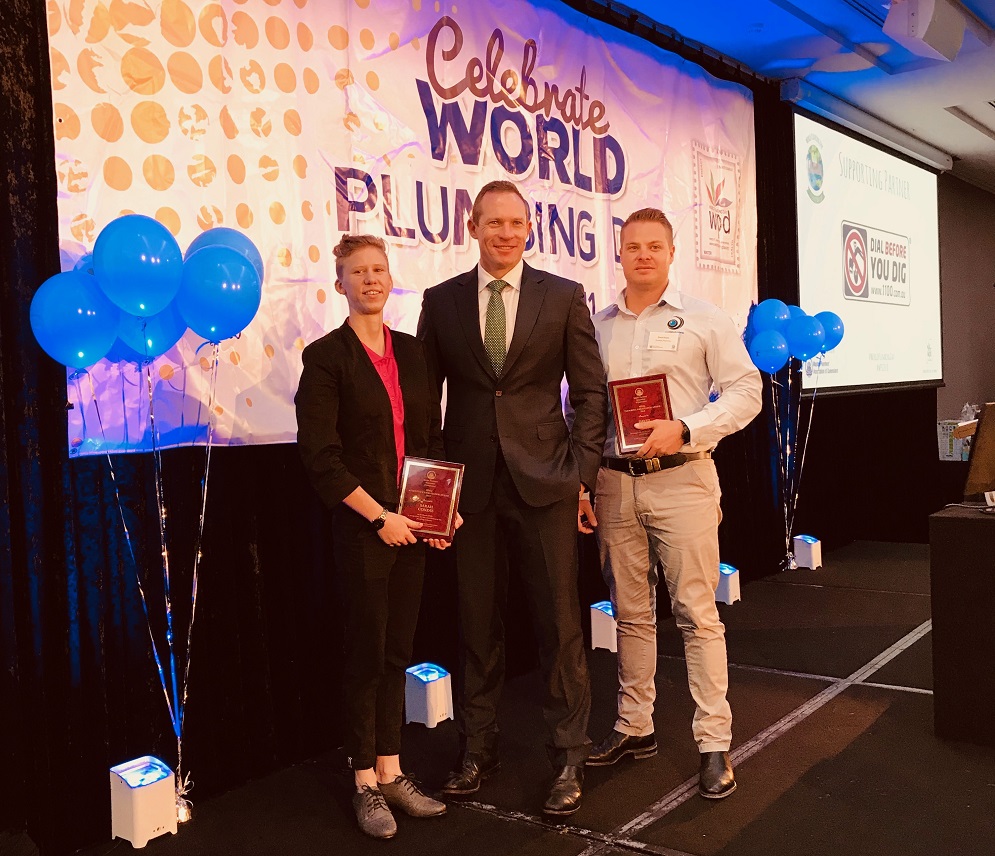 A Gold Coast plumber and Brisbane apprentice were unveiled this morning as the new Queensland plumbing ambassadors for 2018. The announcement was made in front of over 300 attendees at the World Plumbing Day Breakfast, which was hosted by Master Plumbers’ Association of Queensland (MPAQ).

The purpose of the plumbing ambassadorship programs is to promote the trade across Queensland and encourage future generations to consider it as a future career path. The ambassadors will play an important role with MPAQ in 2018.

David Keys, a Project Manager for Obsidian Plumbing and qualified plumber and drainer, was announced as the 2018 Queensland Plumbing Ambassador. David has 12 years’ experience leading teams within oil, gas and residential construction projects both in Australia and Papua New Guinea.

Mr Keys said “my goal would be to change the mindset of the younger generation who want to become a qualified plumber and show them that we are not all just about unblocking toilets but that we can also make our way into the professional corporate world of business and technology.”

The 2018 Queensland Apprentice Plumbing Ambassador is Sarah Condie, who is currently completing her apprenticeship with Tradettes Plumbing. About to start the third year of her apprenticeship, Sarah has shown her abilities as an apprentice and a leader for other females who want to join the trades industries.

MPAQ Executive Director, Penny Cornah, said “In 2016 and 2017, MPAQ focused on encouraging females into the industry, with the Female Plumbing Ambassadorship. Since then, we have expanded on this project and now want to focus on the industry as a whole, both male and female, ensuring the longevity of our industry.”

“Both the Plumbing and Apprentice Plumbing Ambassador will focus on raising awareness to students about studying an apprenticeship and explaining where a trade can take them both professionally and personally,” Ms Cornah said.

“In their respective ambassador roles, David and Sarah represent the different stages of a career in plumbing and will share a diverse and valuable insight into the industry with future apprentices and the general public.”

Congratulations to both David and Sarah on being appointed as this year’s Queensland Plumbing Ambassador and Apprentice Ambassador.

About World Plumbing Day and Plumbers

World Plumbing Day seeks to highlight the vital role that plumbers play in maintaining and protecting the health and safety of the community through the provision of clean drinking water and the appropriate management of waste. The plumbing industry makes an extraordinary contribution to human health, the environment and prosperity; however, it is minimally recognised. In recent years, we have seen an increase in awareness of water and energy usage, and the plumbing industry is proactive in promoting the accurate and timely management of water supplies. Population growth coupled with an increase in urbanisation reveals that management of water supplies and waste water services is of paramount importance in Australia.

Plumbing plays one of the most vital roles in managing the health and safety of the local community, as well as the wider community. It is for this reason that it is so import that plumbers are publicly recognised for their hard work and long studied skills.

Is your plumber a Master Plumber?